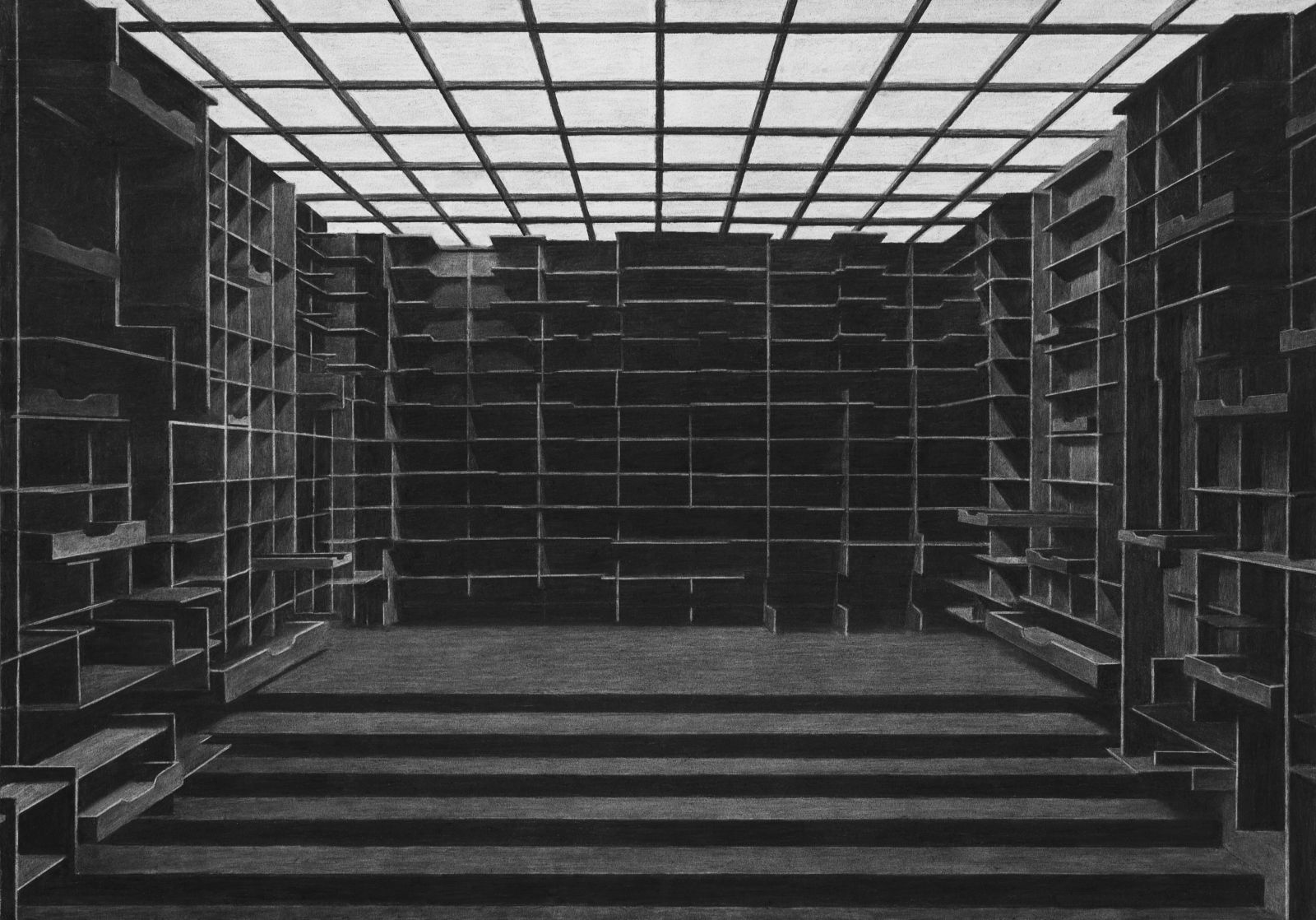 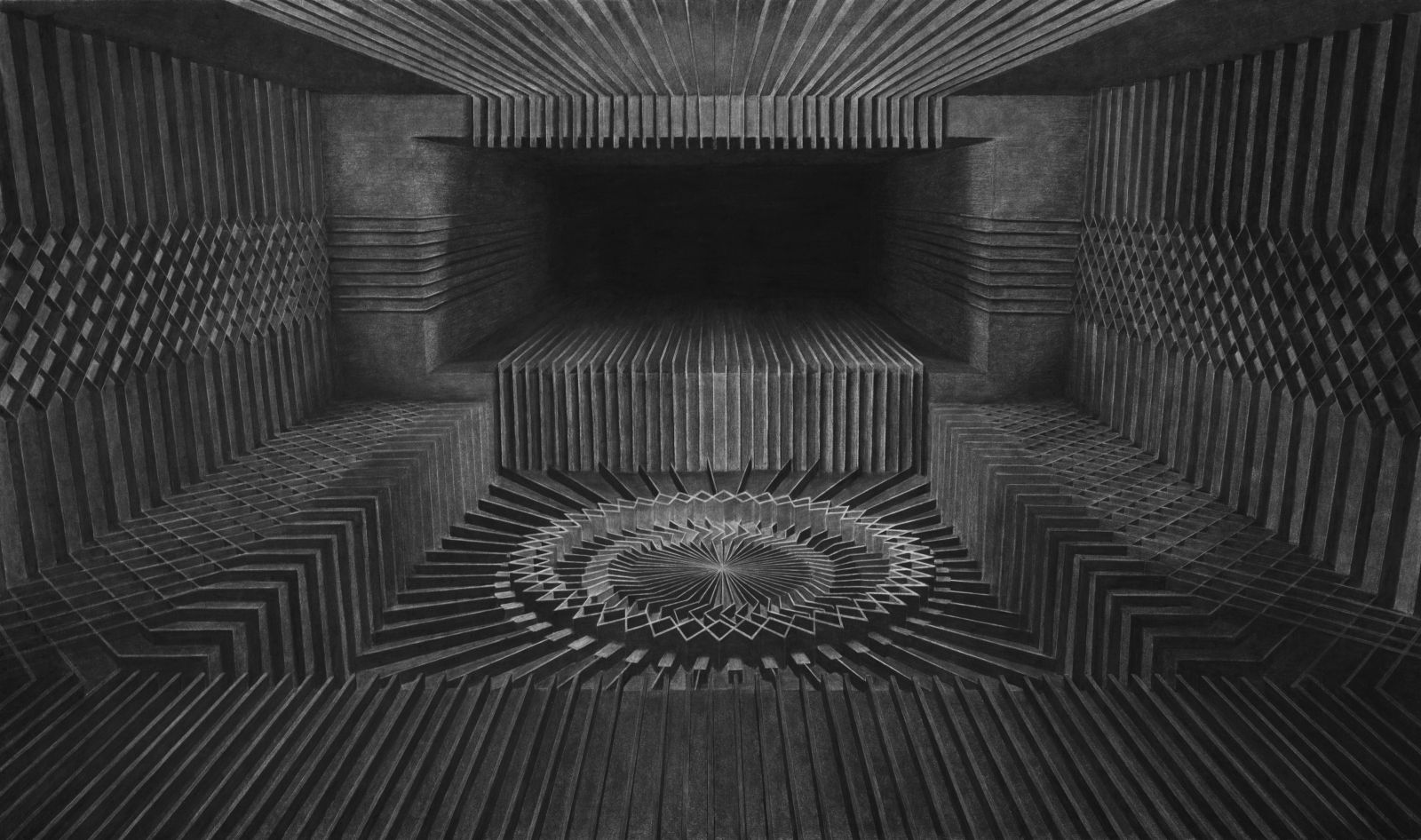 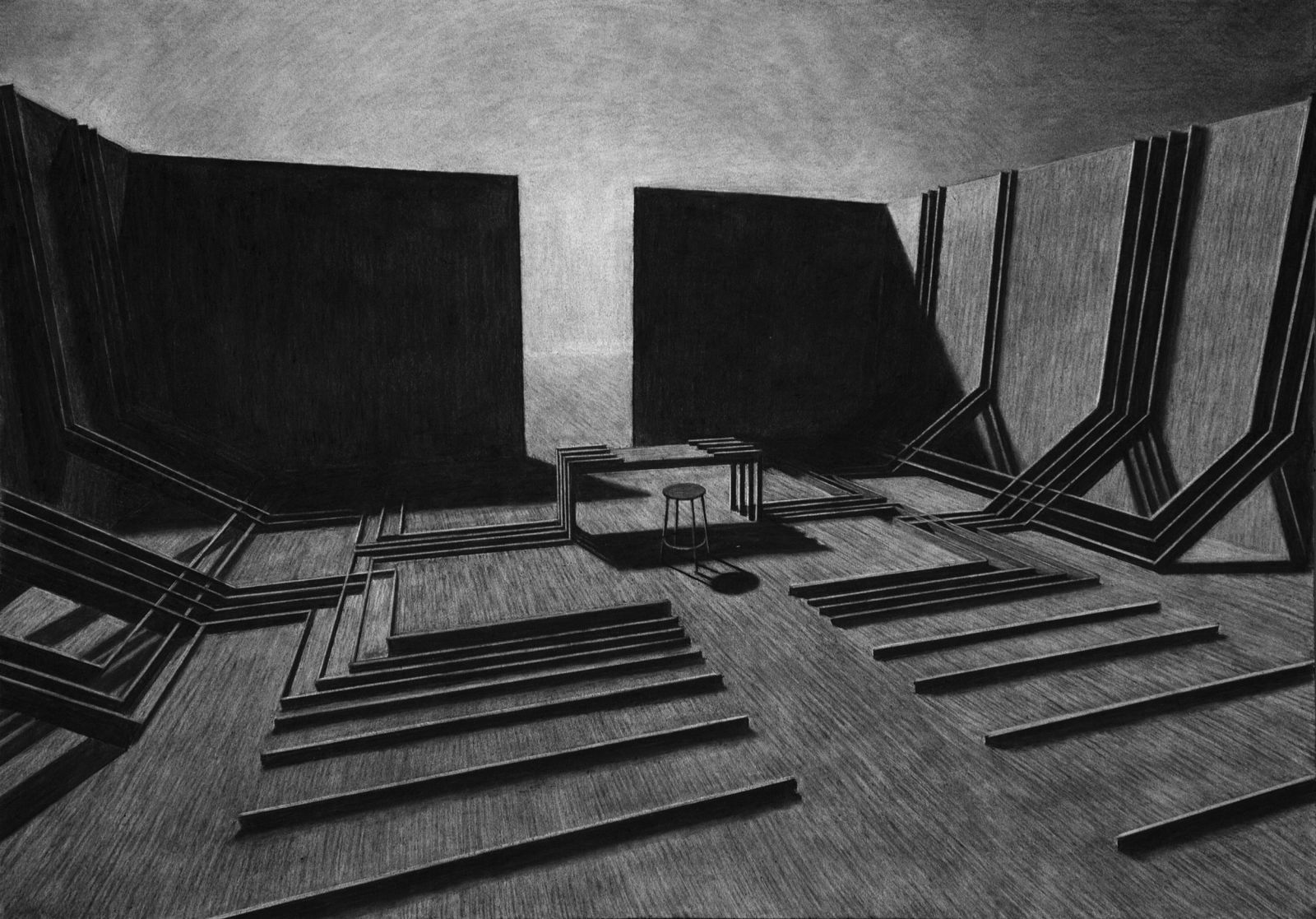 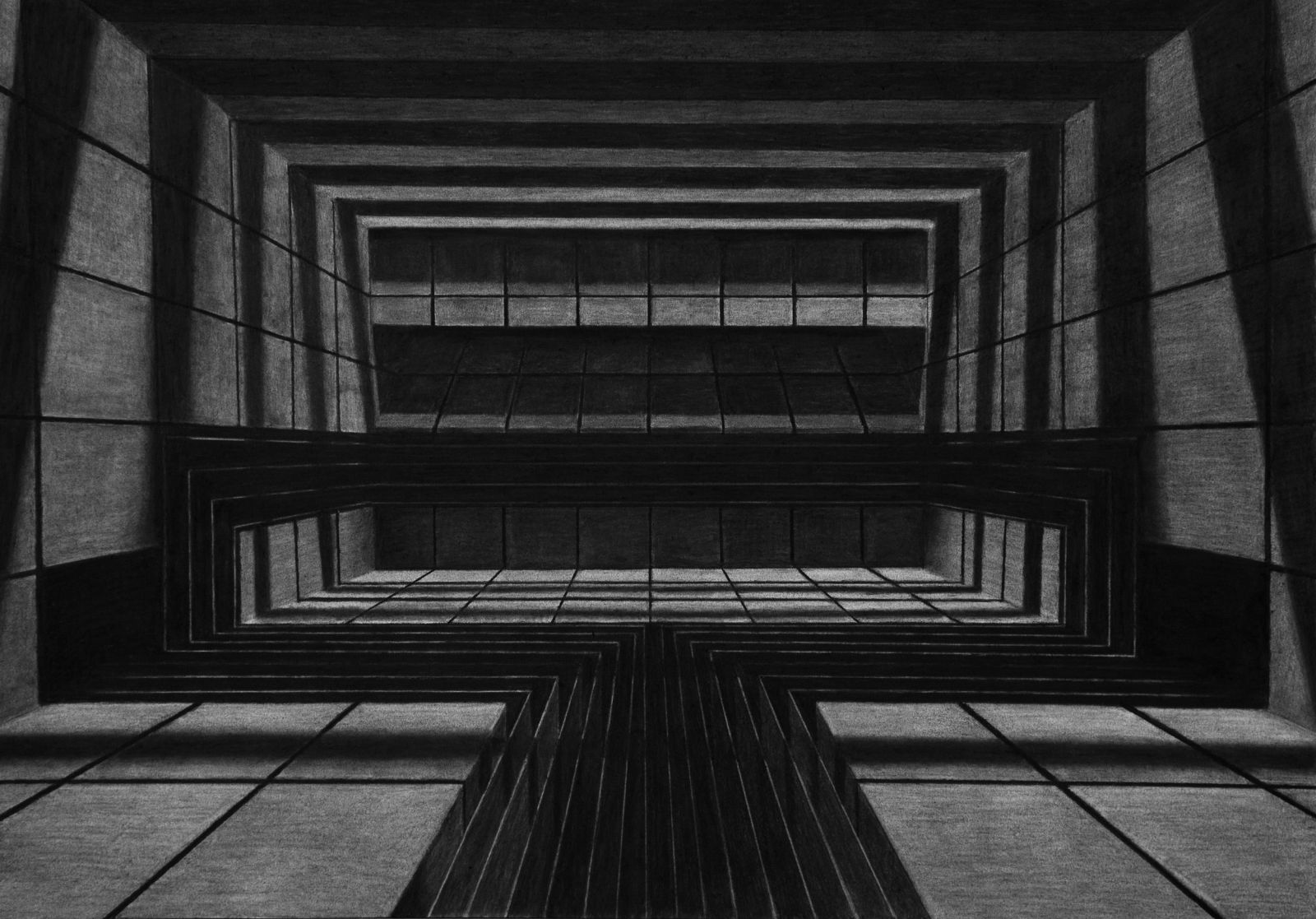 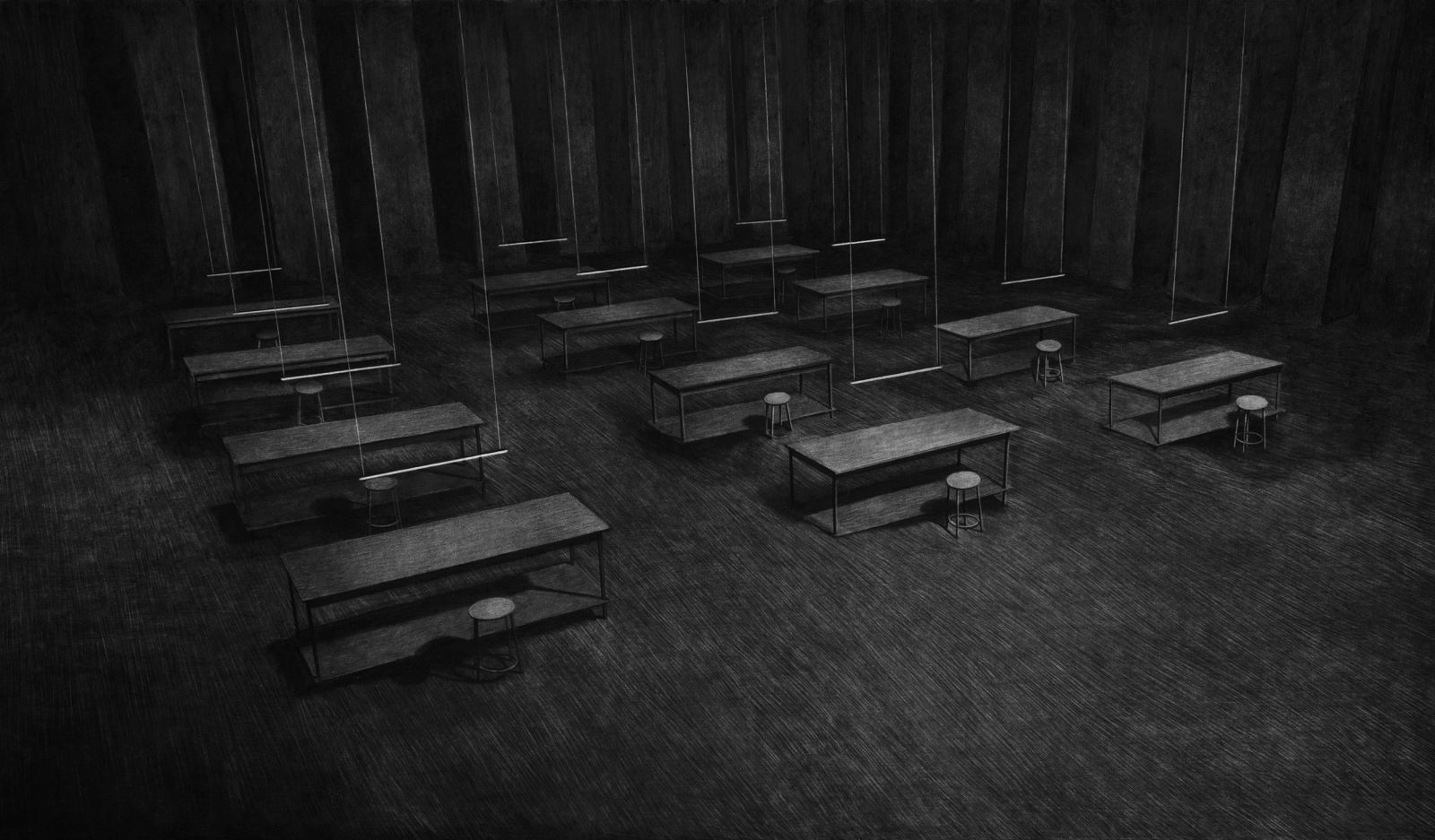 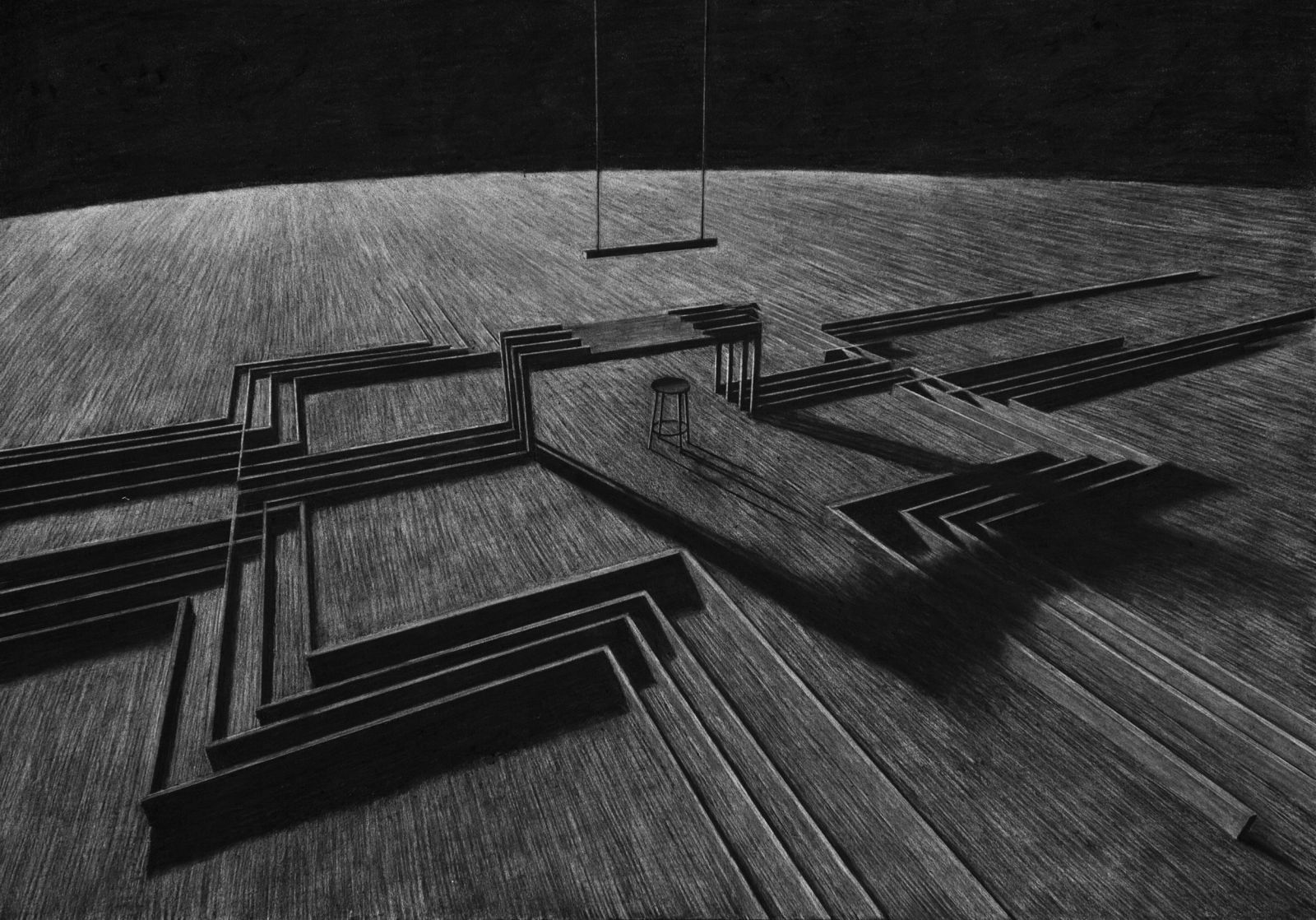 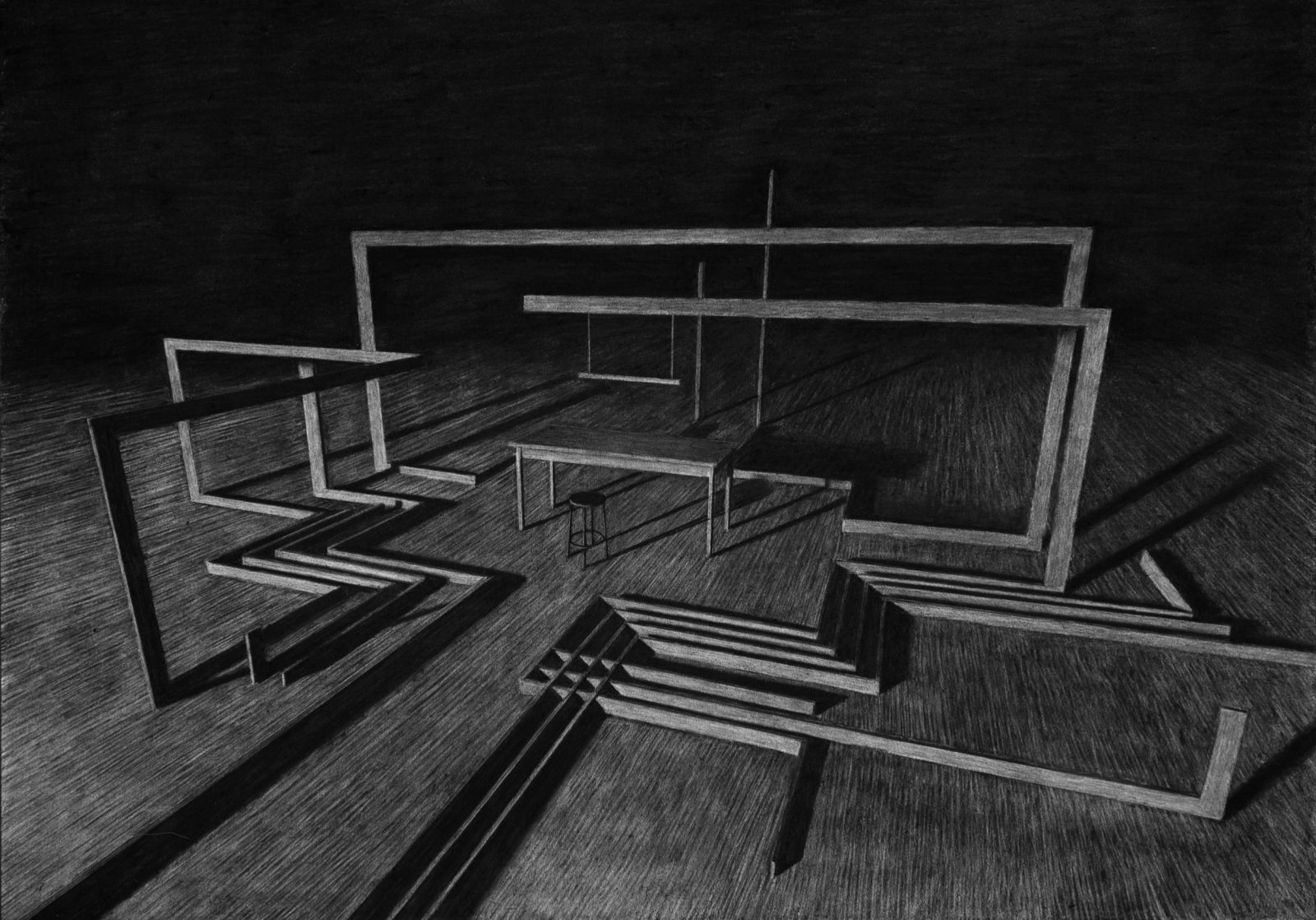 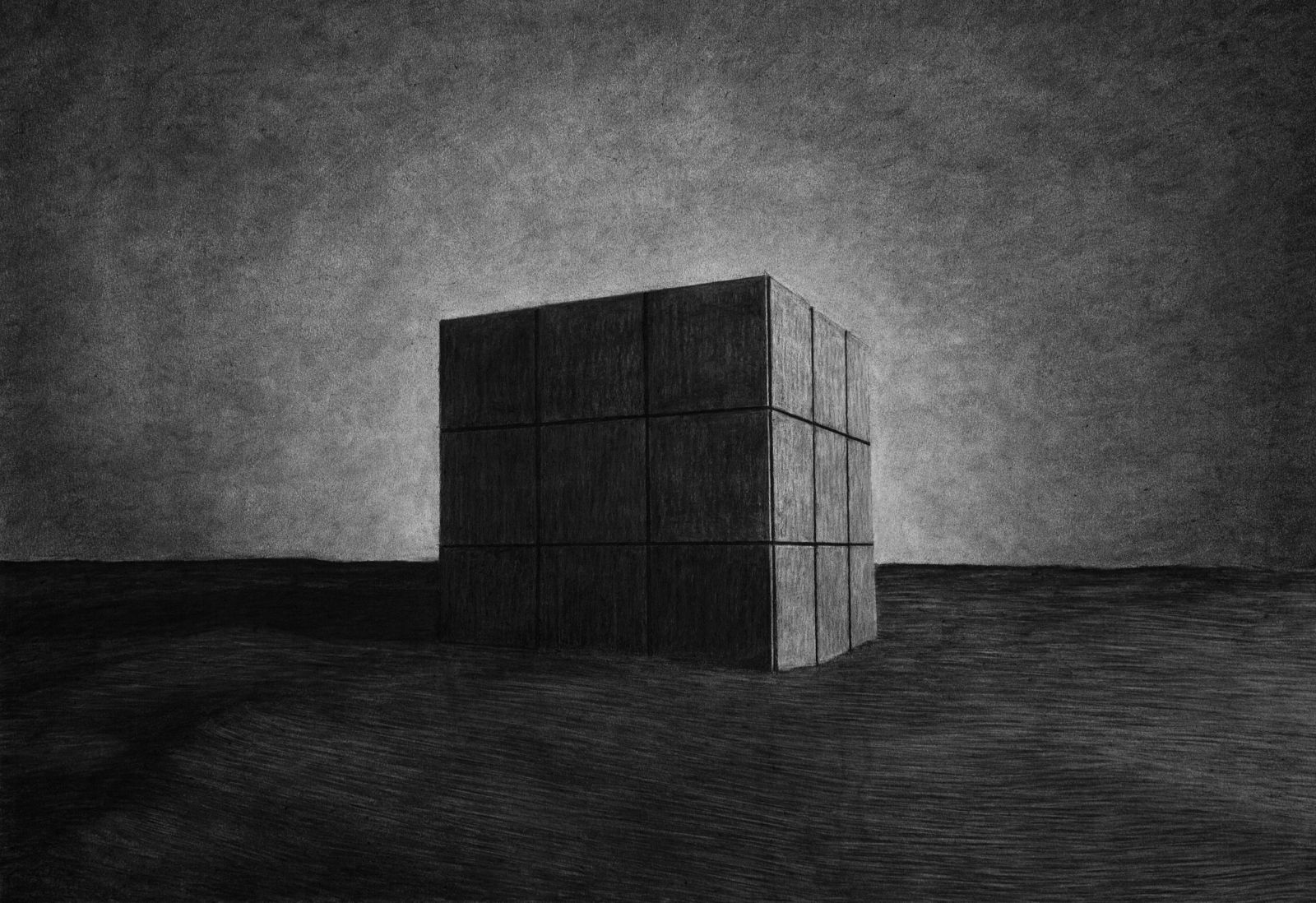 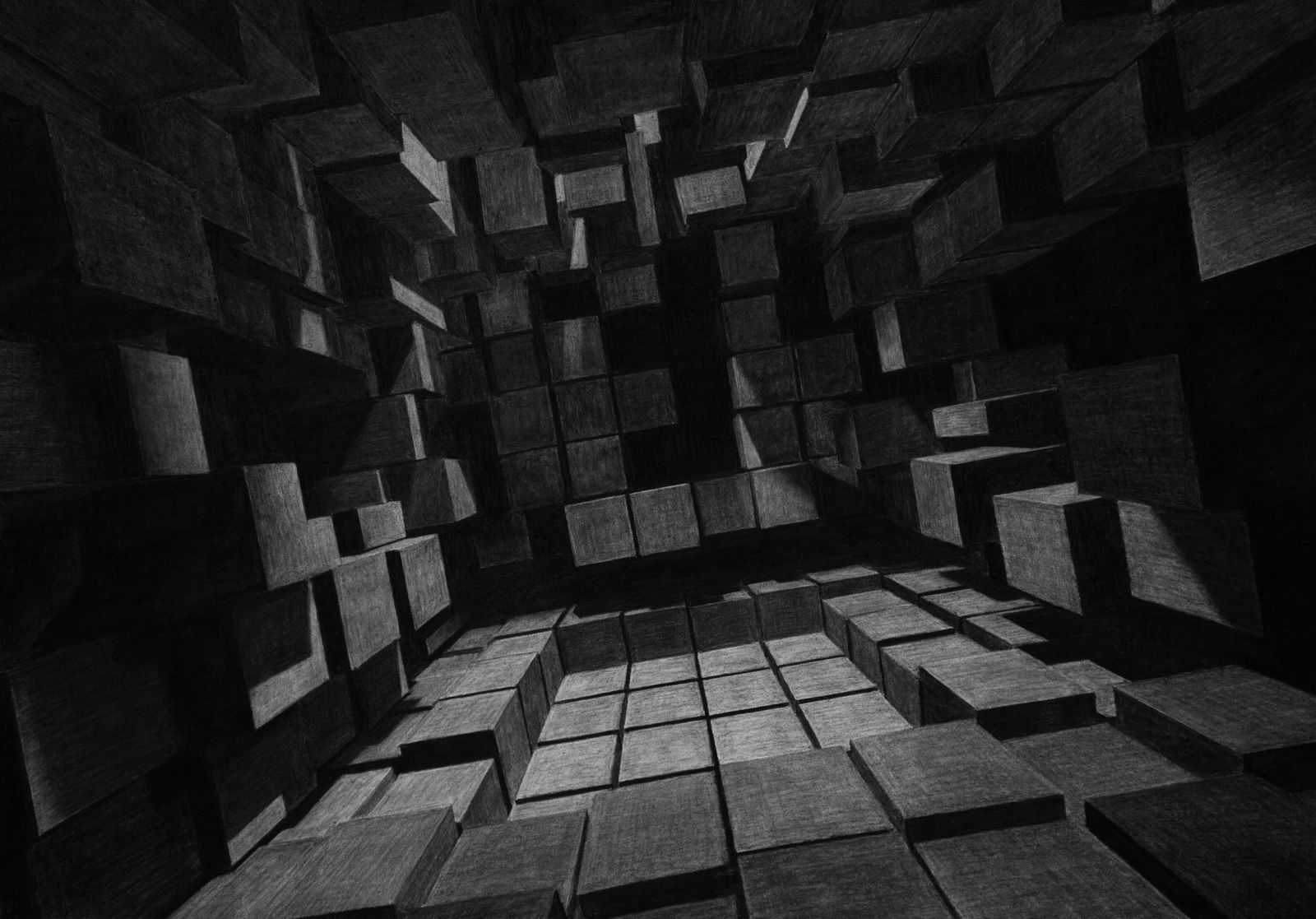 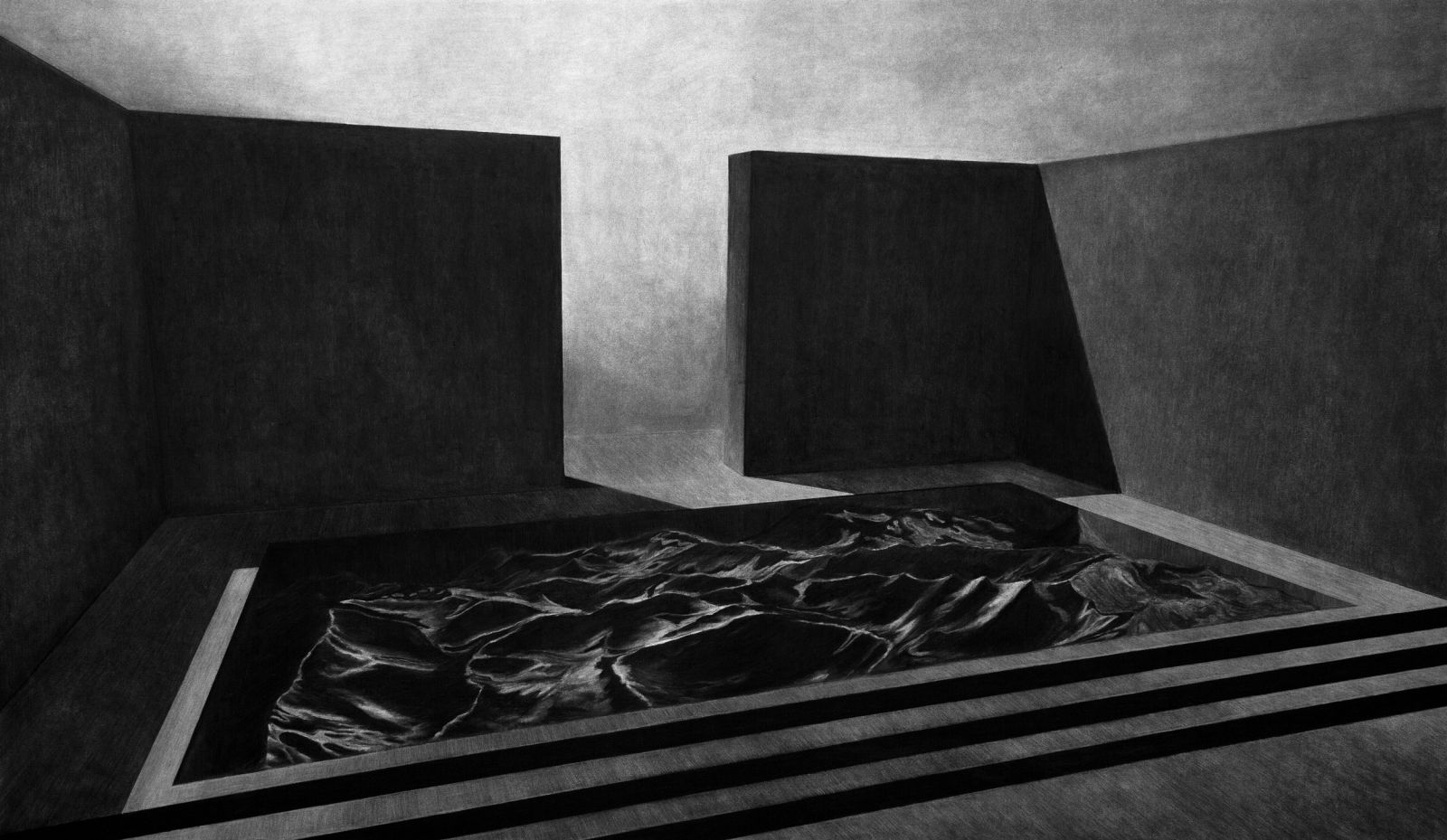 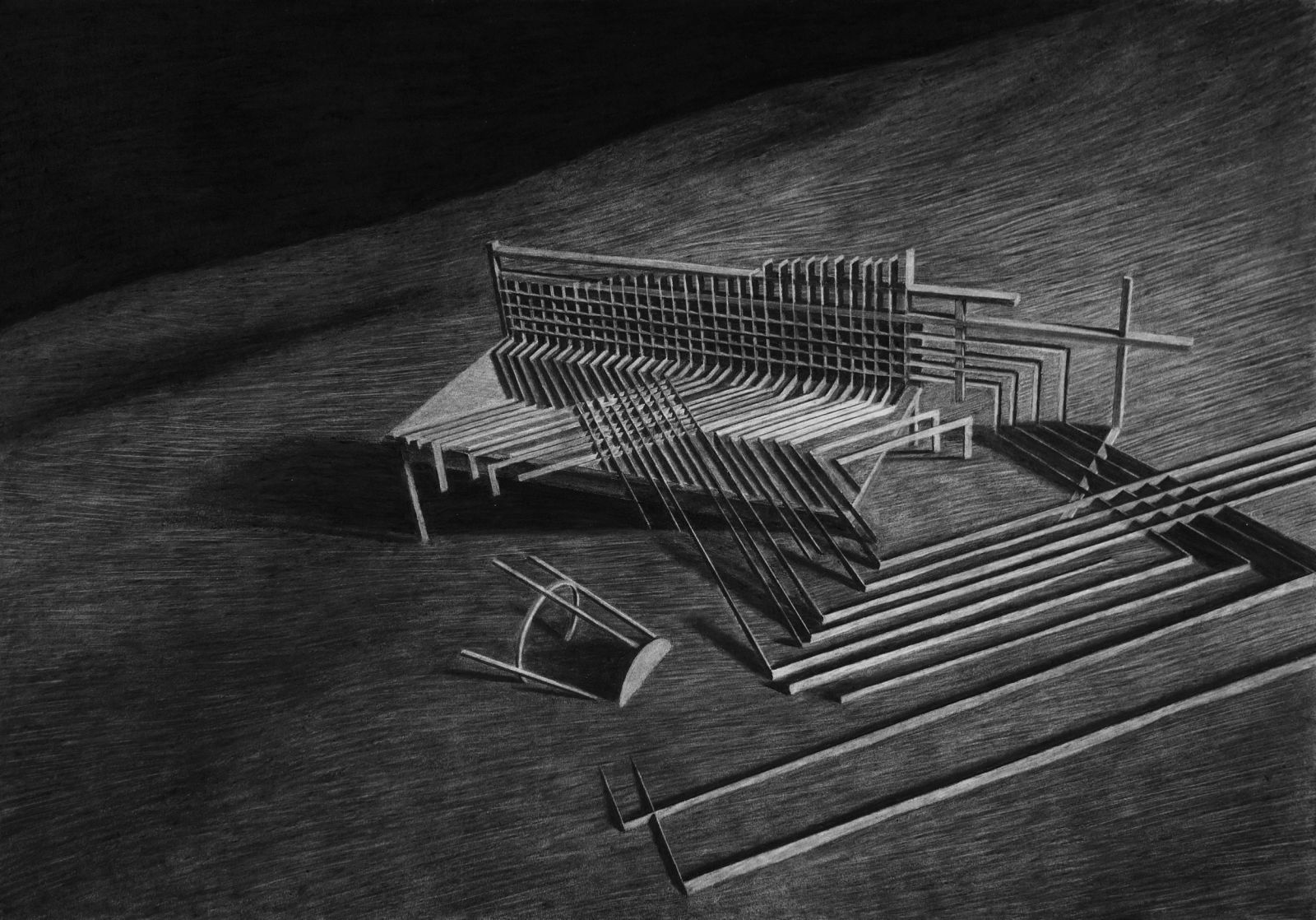 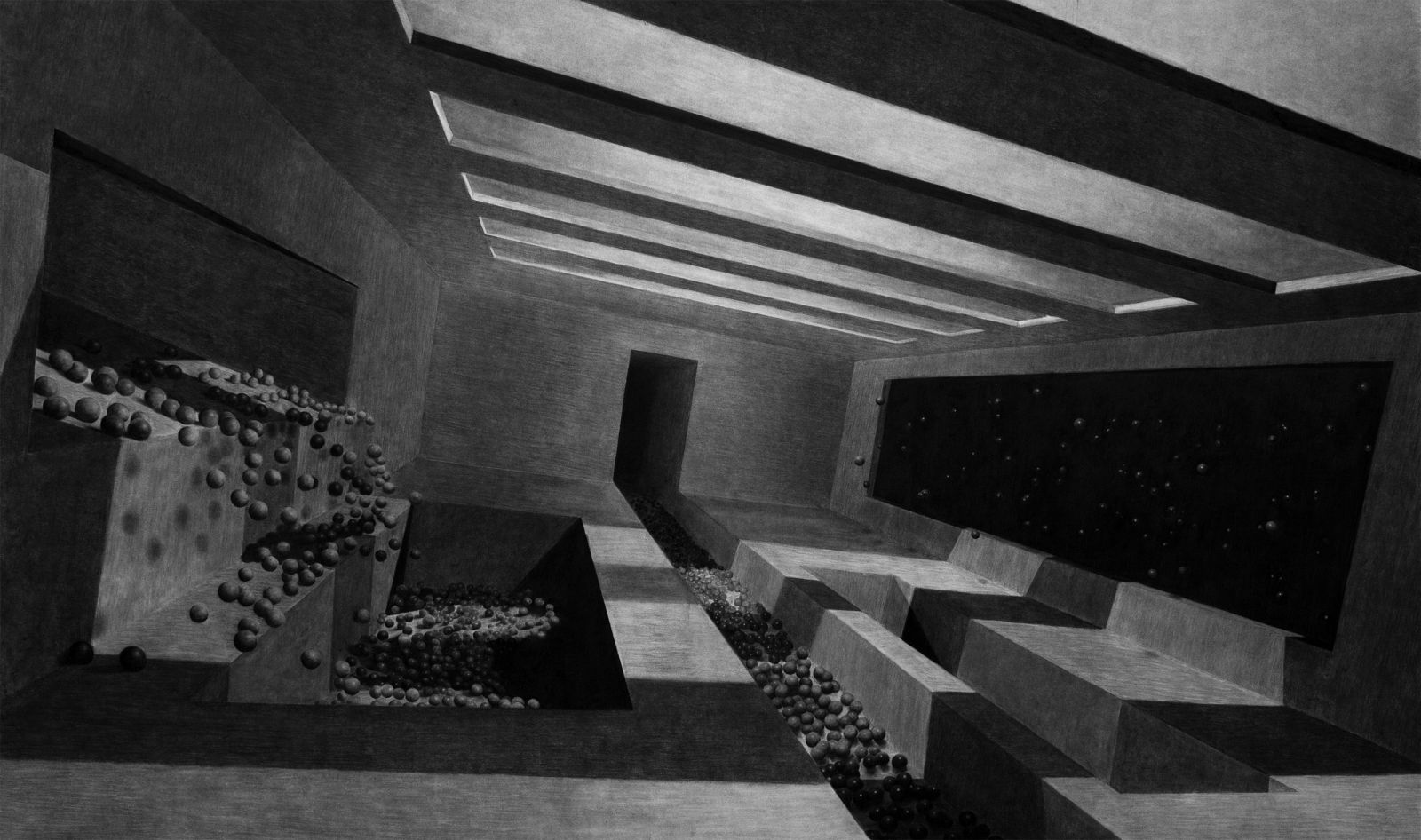 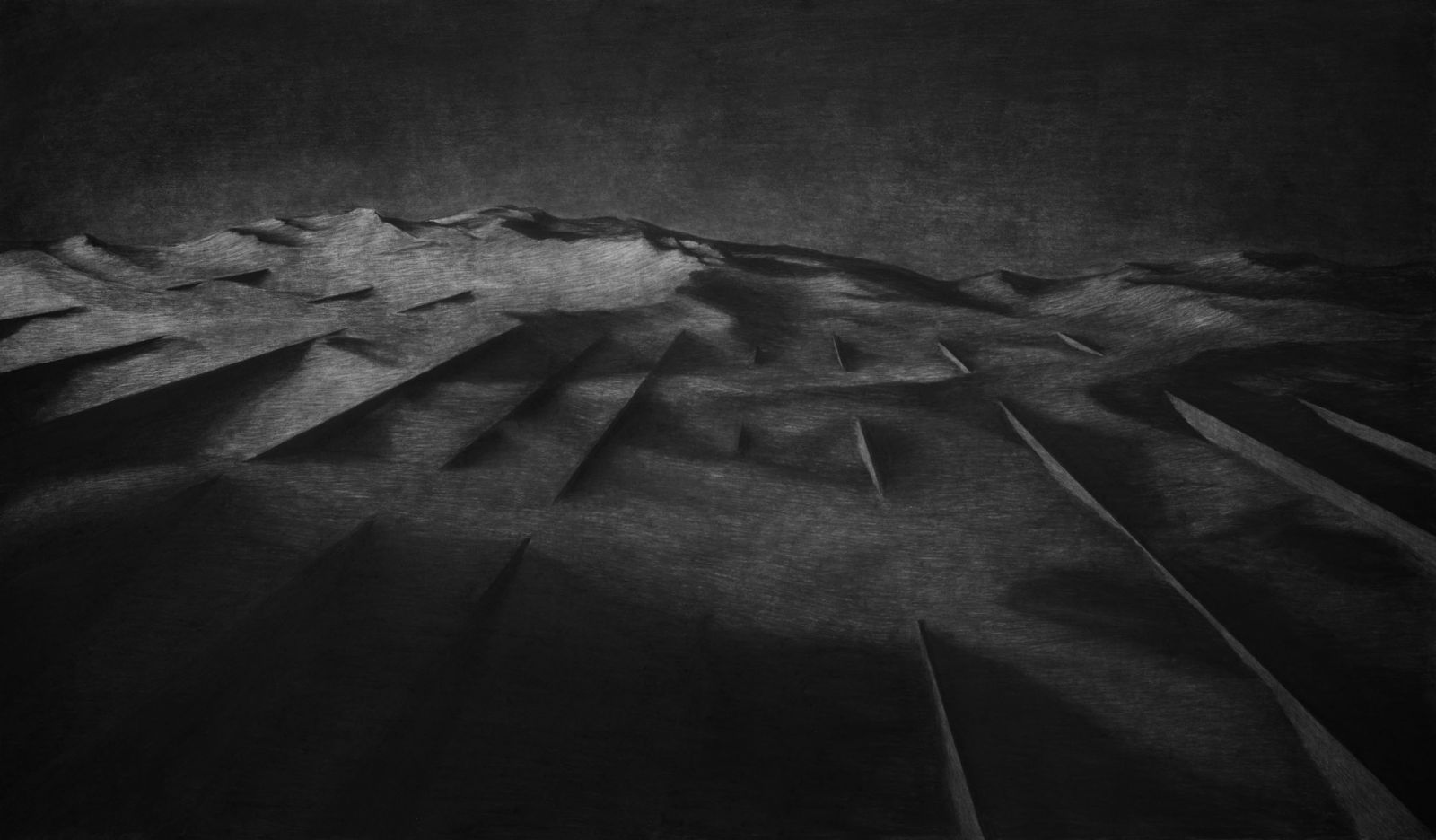 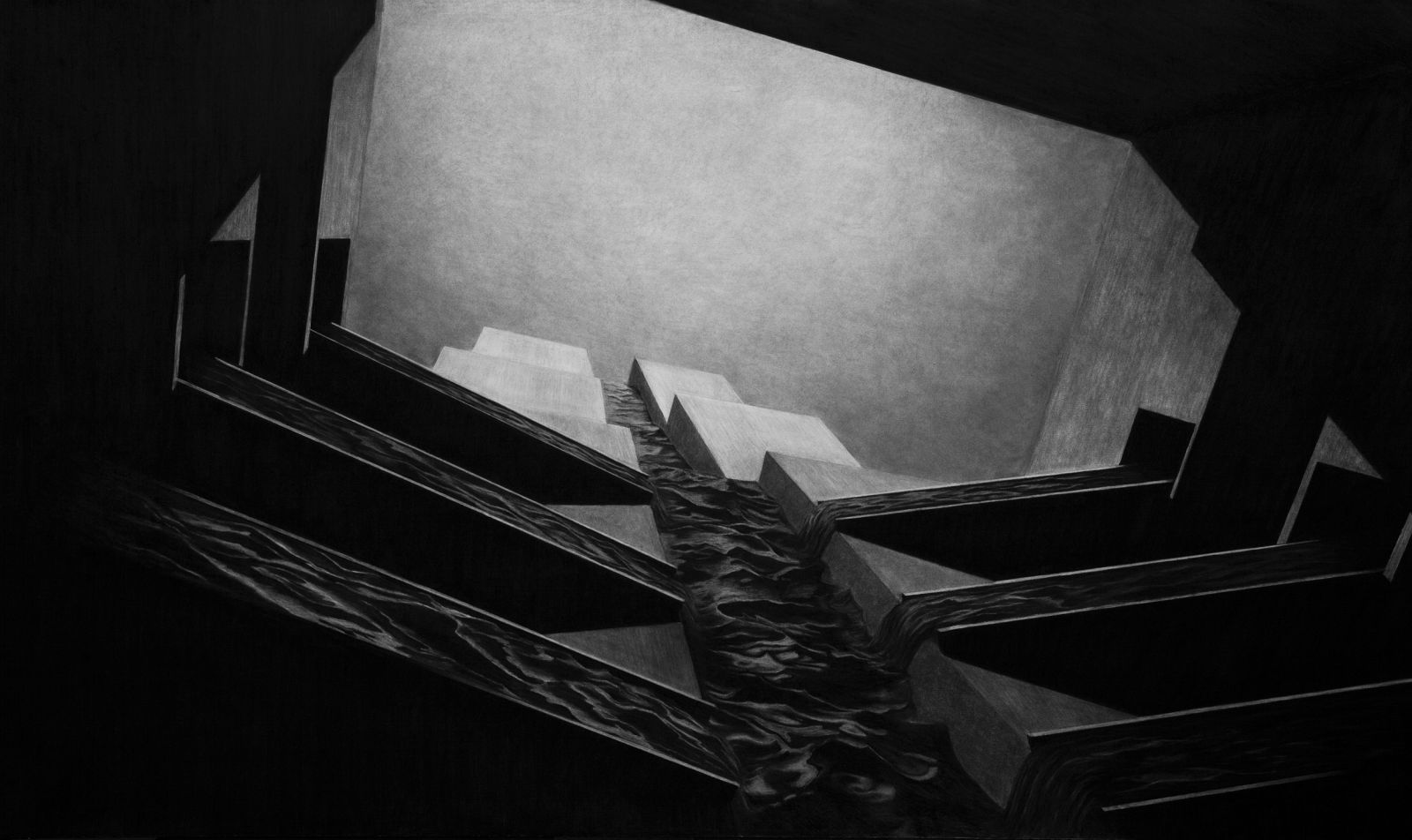 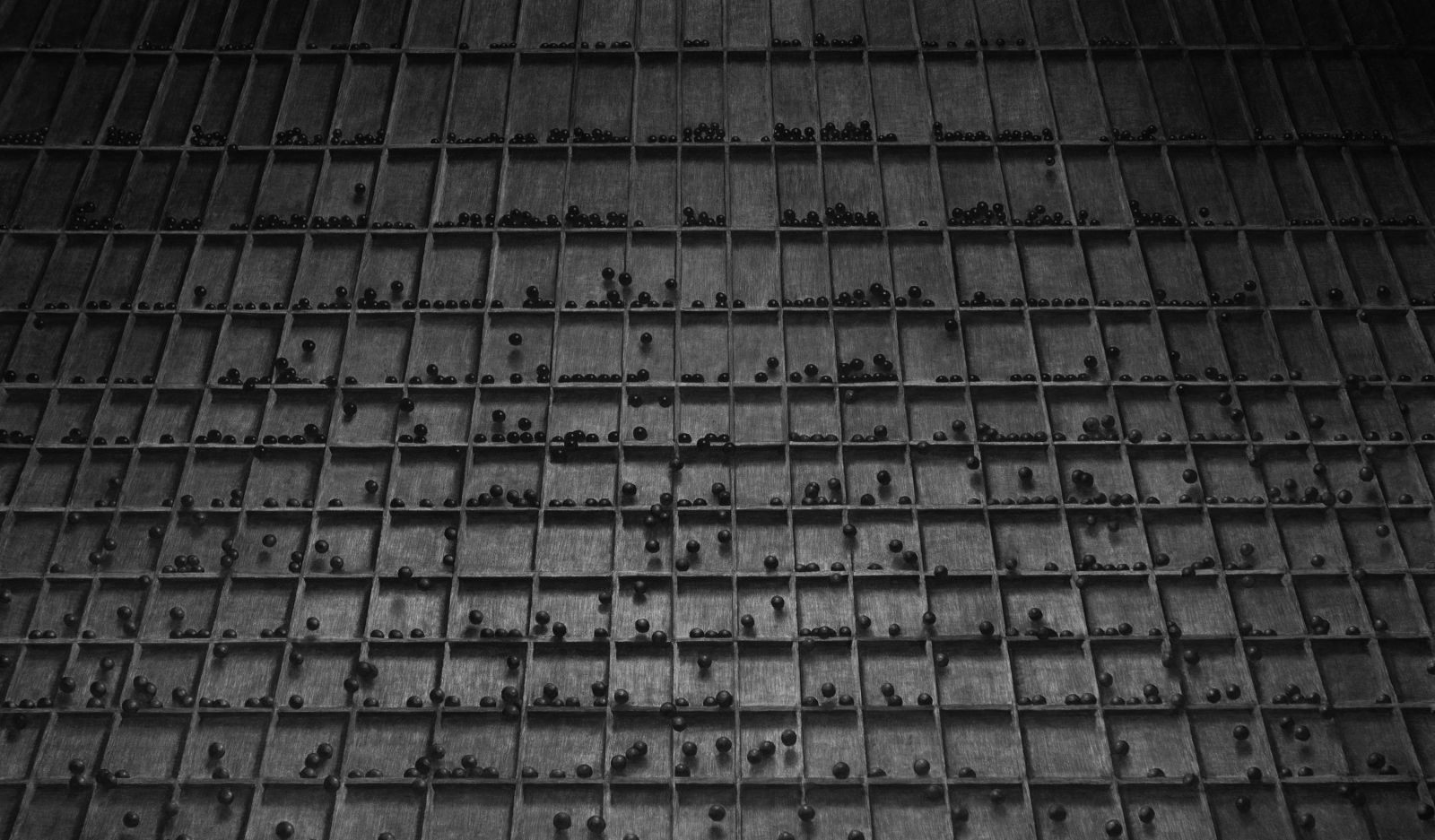 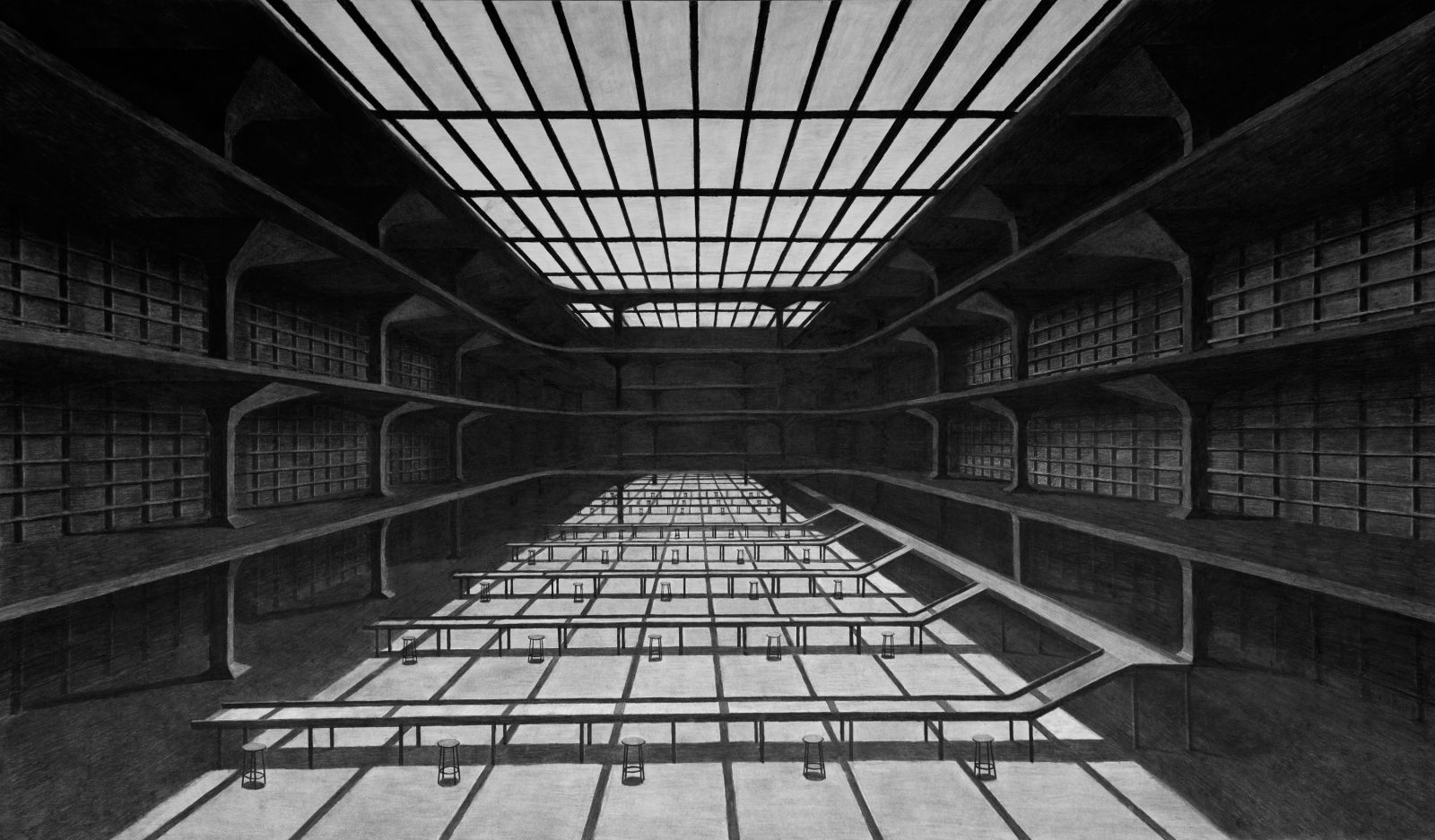 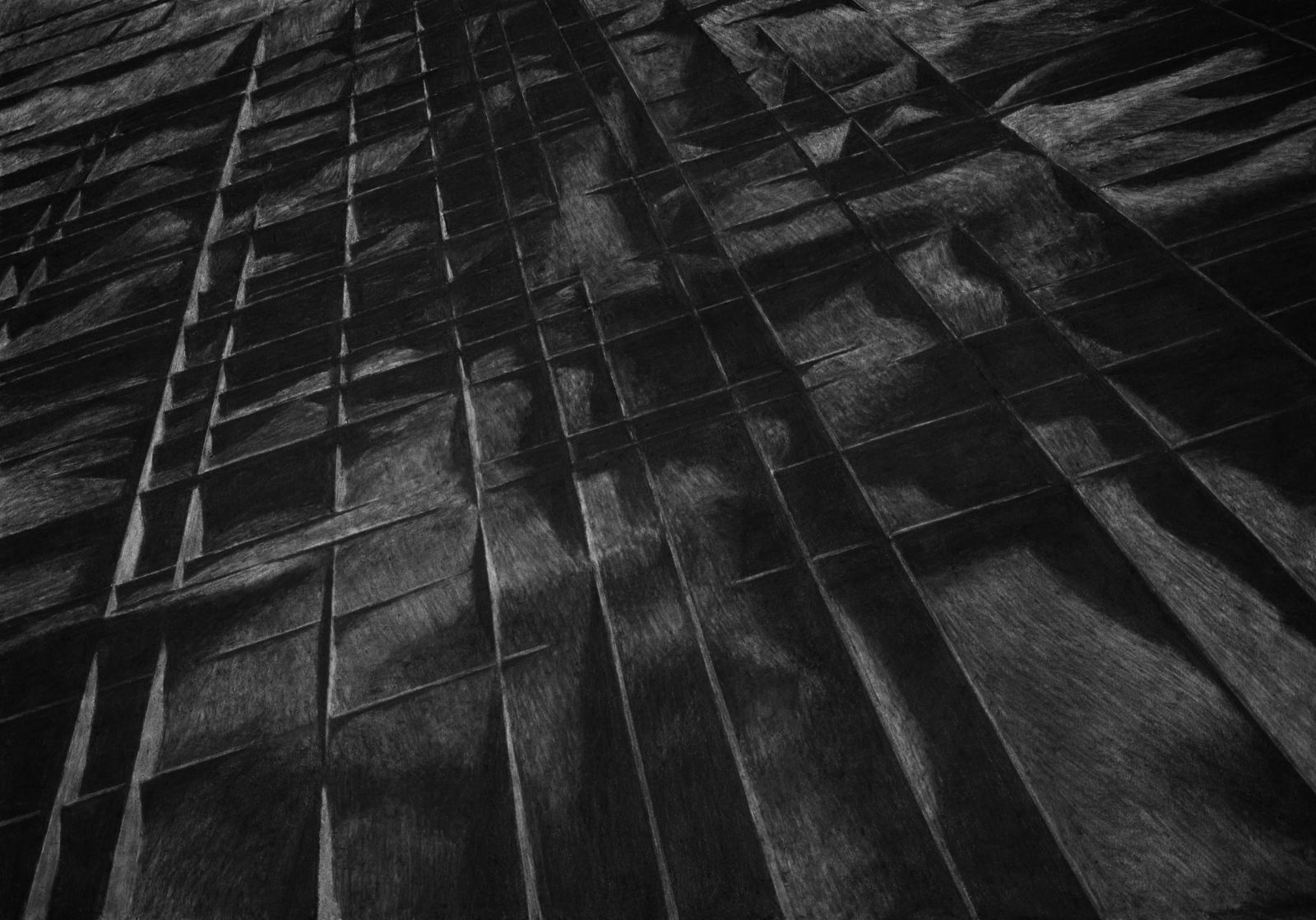 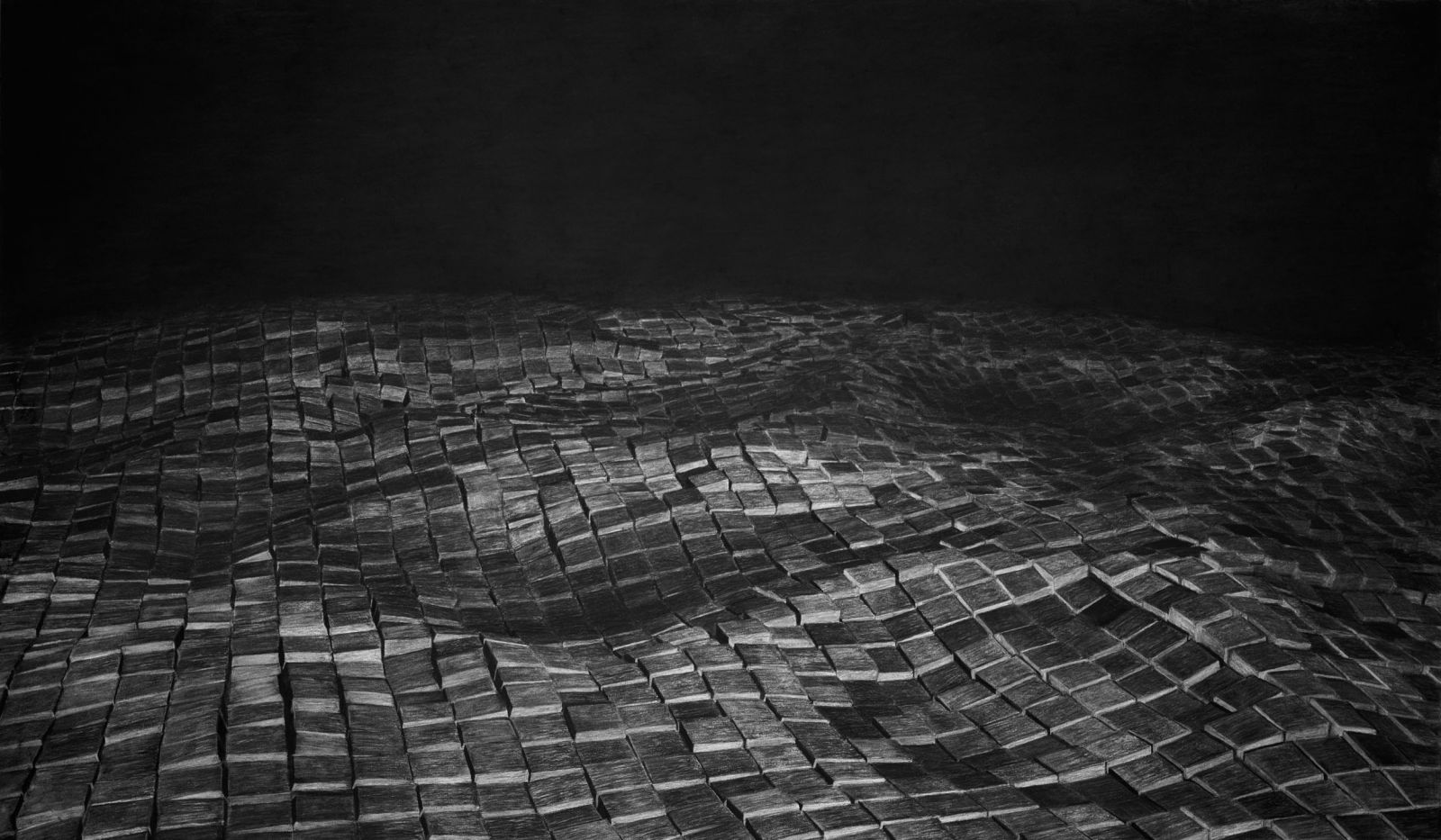 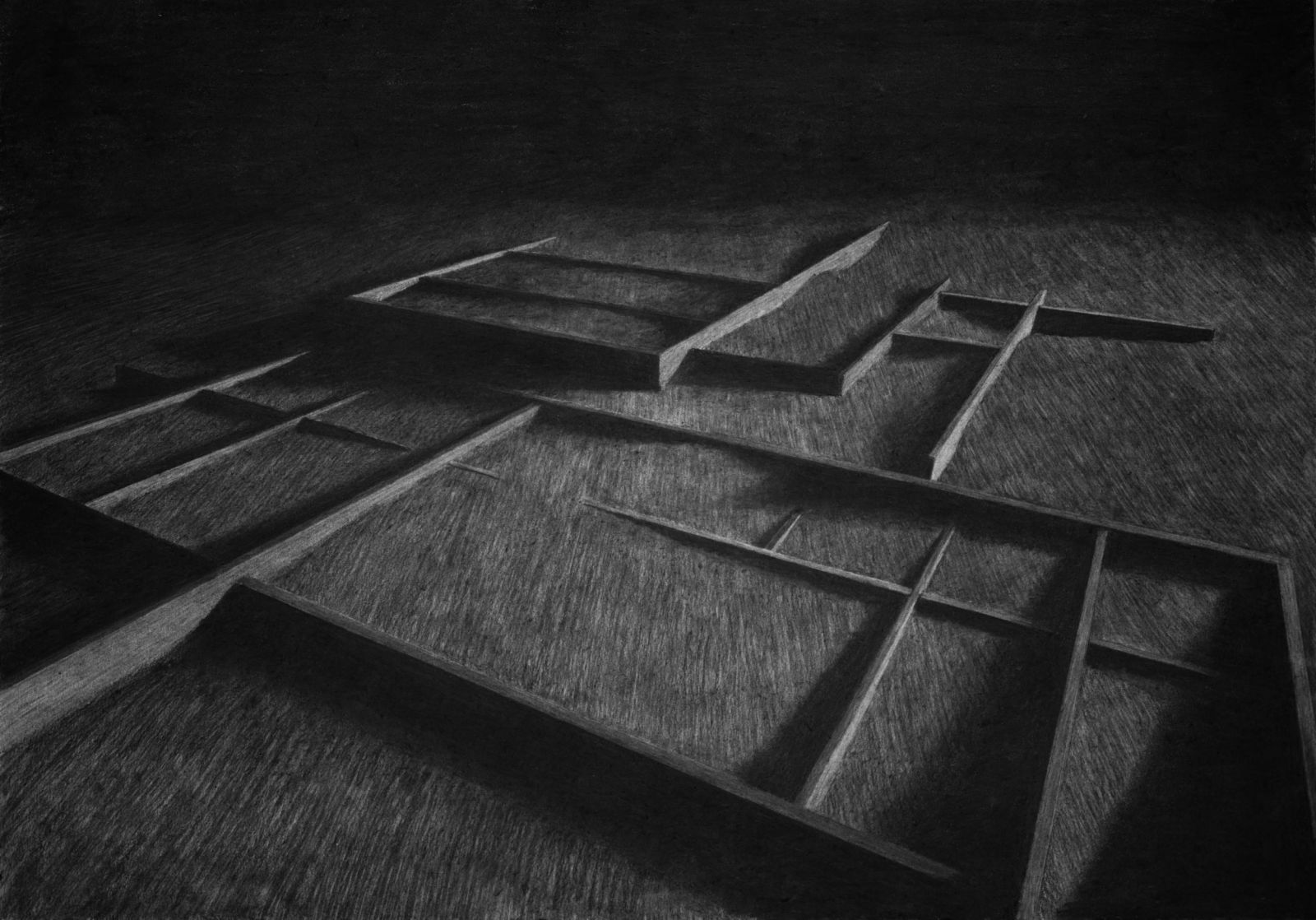 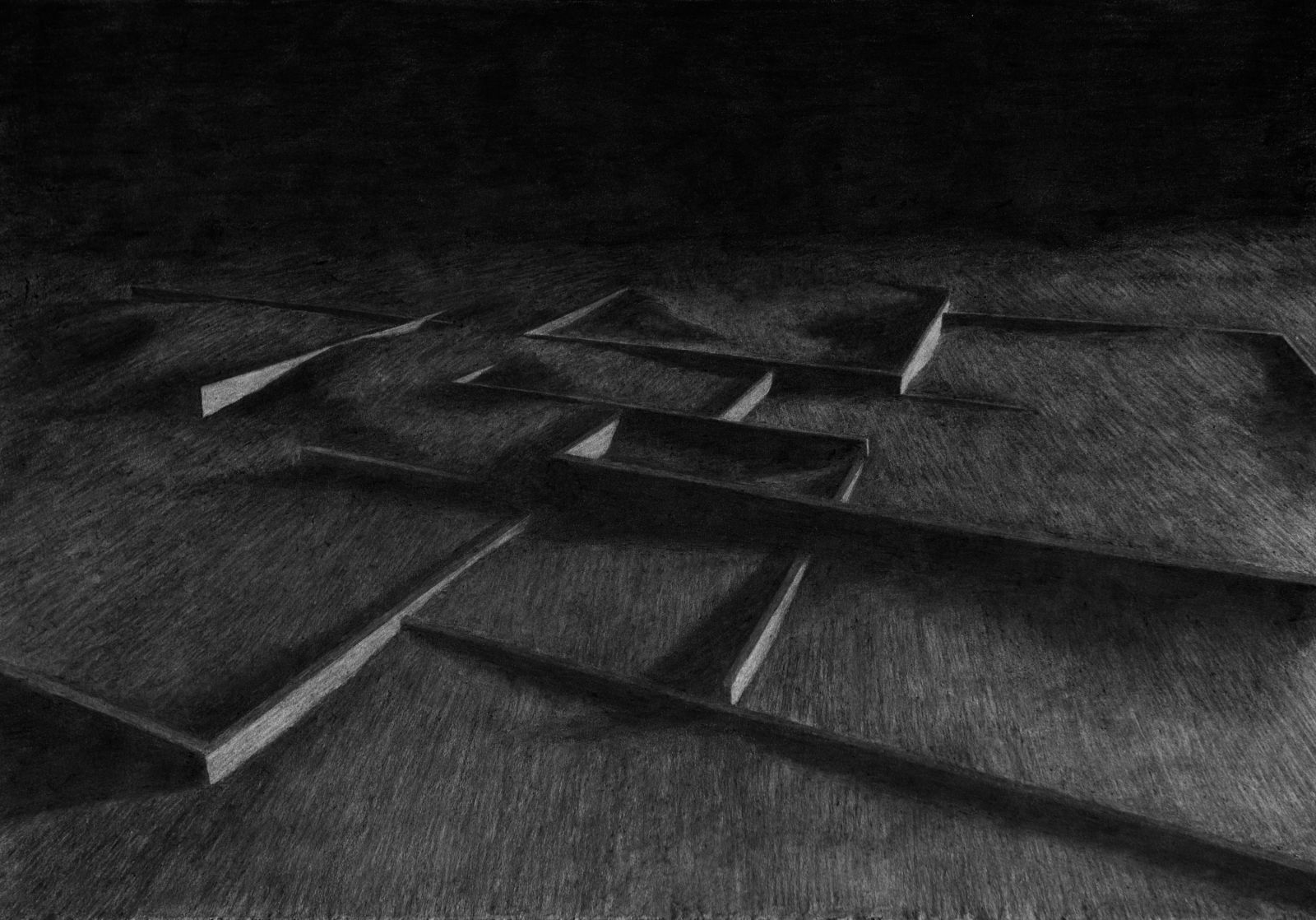 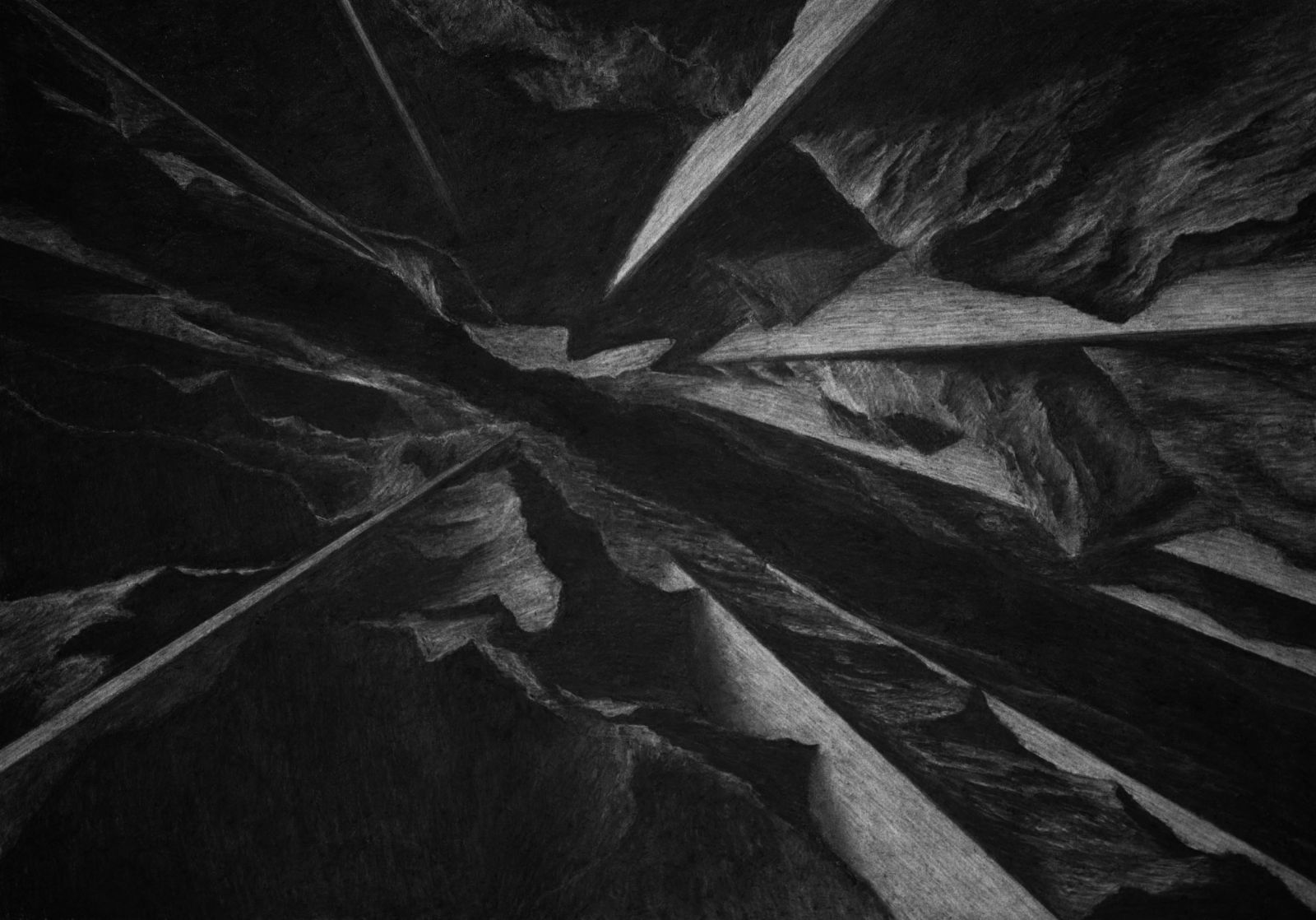 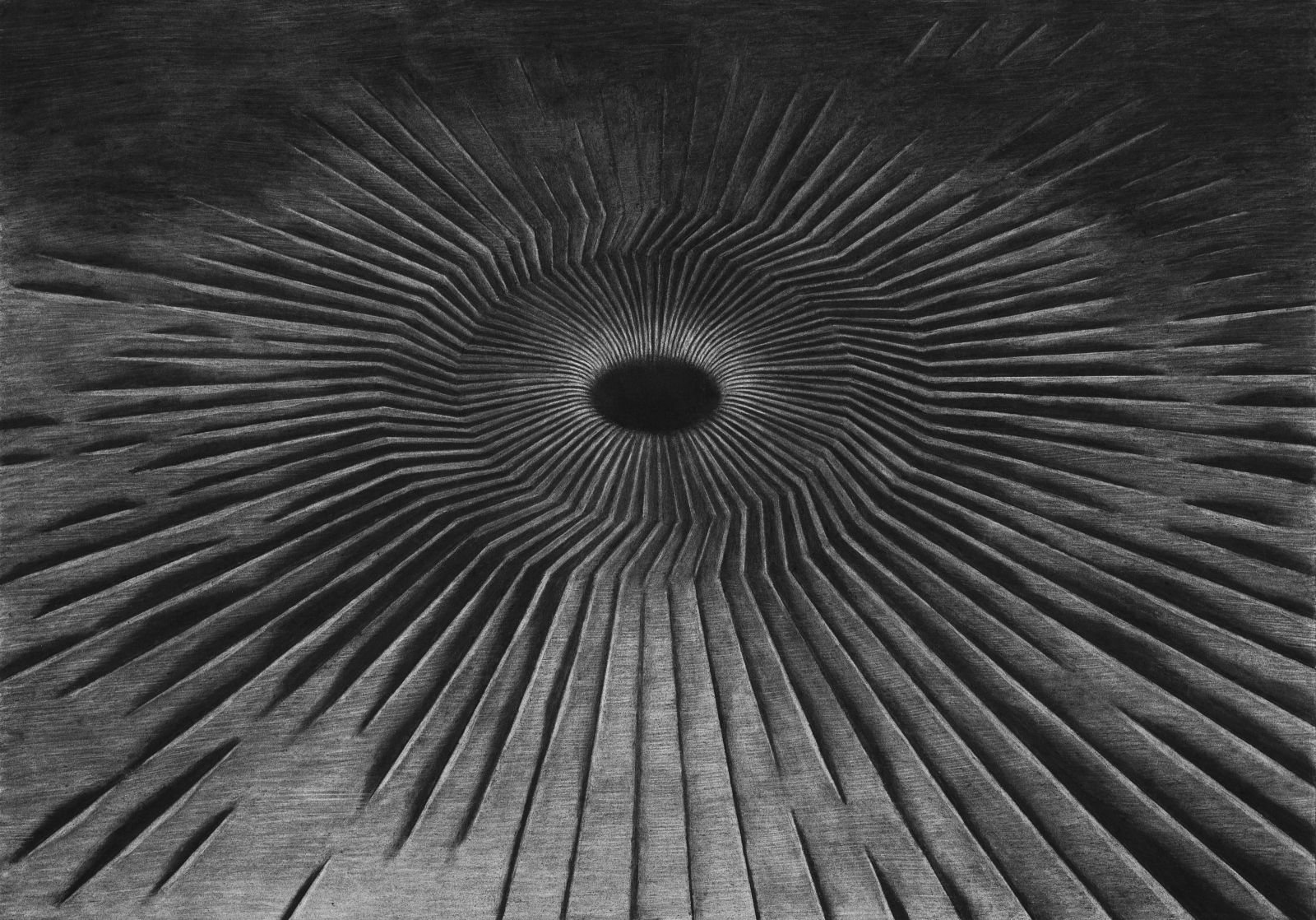 Since his early childhood, Van Veluw has been fascinated by things that are theoretically possible but difficult to imagine. The fantasy about an environment with other laws of nature, a world with a different logic from ours occupies him. 10 years ago, he became fascinated with Science Fiction books by Fred Hoyle, Isaac Asimov and Aldous Huxley.

In his work, van Veluw often reverts to the underlying principles of these stories in which science, technology and the development of knowledge are called into question.

"By creating an environment in which everything must be redefined, the visitor loses his hold and grip on reality. His senses and brain become over-stimulated, emotions and feelings are fired up. The visitor is hyper-aware of his surroundings and at the same time invited to become part of it."

It is in particular the psychological part of this process van Veluw is interested in. Through the use of unrecognizable forms and the creation of a disruptive environment, the visitor becomes disassociated from his existing associations.

A perfect cube is set in the middle of a space. It looks like a massive construction, yet behind its dark walls, like a creator, the inventor, the artist, the maker builds a new universe. He invents, collects, organizes, arranges, makes, forges and polishes. The Monolith is the source. Outside of this core exists an alternative reality that solely originates in this 'laboratory'.

The visual elements such as grids, geometric shapes, a desk or specific surroundings, all reminiscent of van Veluw's previous work, are made visible in a variety of ways.

Sometimes they appear familiar, at other times alienating or fragmented, disconnected or rather reintroduced in a new context. Substantive themes, such as chaos, order, disorder or alienation, which van Veluw explored in previous works, also reappear in these works.

The Foundation’ also encompasses the artist’s multi-disciplinary practice which spans large scale installation, drawings, video, sculpture and photography and follows on from his much acclaimed solo show - entitled ‘The Relativity of Matter’ - at the Marres House for Contemporary Culture in Maastricht.

On the occasion of this gargantuan undertaking, Van Veluw had been working for more than a year on an immersive installation consisting of constructing a building within the period building of the museum.

Visitors entered alone into this alternative reality. From room to room, the person is plunged into an ever stranger world and confronted by seemingly different forms of primal matter. Levi’s two long-term previous projects, ‘The Origin of the Beginning’ and ‘The Collapse of Cohesion’ represent previous instalments in the artist’s fascination with creating parallel universes.

Elements of fantasy, order and loss of control are a substantial continuum in his work. Van Veluw’s ambitious projects to date have all been inspired by the underlying tension between our desire for a regulated universe and the rational impossibility of total control. The dynamic of this quandary stands at the very heart of his practice.

On the same note, ‘The Foundation’ explores the mind set of a collector whose maniacal attempts to control his universe through collecting are frustrated by the plurality of forms inherent to the matter he is struggling to dominate.

The pivotal work from which, like a tree, all other branches grow, is a voluminous container that entirely occupies a consistent area of the gallery space. Penetrating this mysterious environment, one is enveloped in a dimly lit, claustrophobic world, surrounded by a myriad of objects representing some primeval form of matter awaiting classification. A chair and a desk allude to an absent protagonist. This all-encompassing experience leads into the exploration of a parallel cosmos where sculptures and drawings give added depth to this unfamiliar and at times surreal reality.

A group of compellingly enigmatic drawings echoing undefined Aztec-like architectural landscapes and an uninhabited workplace, reinforces one’s quest for the notion of perfection within an orderly, systematic structure. Nevertheless, perfection in its fulfilling completion is nowhere to be encountered. The permanent sense of unease is augmented by unique series of sculptures which range from arabesque-influenced wall pieces to deserted desks containing layers of the same unclassified matter echoed in the installation.

We search in vain for the architect/collector who will lift the veil and enable us to make this world ours. Yet, although the signs of his/her presence abound, Van Veluw leaves him tantalisingly absent.

And there is a deep basin filled with immersed tables and chairs, illuminated in a very sophisticated manner. The new work of Van Veluw is not cheerful. Nor is it exhilarating. It is breathtakingly beautiful and desponding. For the monolith and charcoal do not offer a way out. NRC Handelsblad

Rathbone Street is home to Rosenfeld Porcini, which houses one of the best exhibitions on this tour. Levi van Veluw has created a 'crazed collector's space', with boxes on the wall containing black fragments of rocks, and a desk filled with wooden balls in something akin to a maze. Londonist